Sometimes persistence pays off! Although times have moved on for the classic red phone box and seeing one still in service is an increasingly rare sight in the age of smartphones, they can still be an important and valued service for some, and an occasional savour in time of need. Tiree has only one box still maintained in-service, the rest have been transferred to the community for use in various ways.

Unfortunately the Baugh phone box was inoperable for quite some time, and had deteriorated badly, with it’s door eventually breaking off entirely. This is an issue that has been raised with TCC several times over a period of over 3 years and has been raised with BT many times, but various factors not least of them the COVID-19 pandemic had delayed a full resolution.

We are however delighted to report that thanks to the attentions of BT engineers, the box has now resumed it’s former glory and is operational, repaired with a new door and some fresh paint: 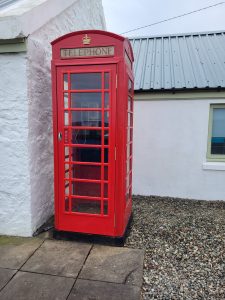 UPDATE: Unfortunately, we have reports that there is still an issue – the coin mechanism is only accepting pound coins! This is on file to be addressed soon!