Below is the final draft of the Tiree Community Council Planning Policy.

For various reasons our timetable for publication of our draft planning policy was severely delayed and as a result the notice for our public meeting to present it and the deadline for the survey were much shorter than intended. We have now been able to meet to discuss this, as part of our “agenda meeting” in advance of the June public meeting, and TCC members are all agreed that we should delay formal discussion of the policy and extend the deadline.

We will therefore be having a second public meeting to present the draft policy on Wednesday June 16th 2021, at 7pm.

The survey, already active, will now remain live until Wednesday 23rd June. We will then aim to analyse the results and write up potential amendments to be considered and then formal debate the policy (and any amendments) at a public meeting on July 14th.

You can review the document here – you may find the formatting displays better using the pdf version on some devices such as iPads or mobiles:

The survey can be accessed here: https://www.surveymonkey.co.uk/r/FN62VSB – we encourage you to come to the public meeting to learn more about the policy and ask questions and hear discussion before you respond, if you can, but you can respond at any time up until Weds 23rd June.

Following a number of delays compared to the original plan (with apologies for the confusion!) we are now able to publish our draft planning policy for consultation with the community.

This document is intended to provide TCC members with a guideline for how we approach our engagement with planning matters. As a Community Council we are statutory consultees on a wide range of planning issues. Engaging with the planning process in order to represent the interests of the community we serve within that process is part of our responsibilities laid down in the Scheme of Establishment for Community Councils. This planning document is intended to provide some helpful clarity and guidance on how we should do that rather than simply leave it up to the members of the TCC to decide on a case-by-case basis.

You can review the document here – you may find the formatting displays better using the pdf version on some devices such as iPads or mobiles:

We will be holding a public meeting to present the policy and answer questions about it on Friday 28th May at 7pm via Zoom. We are also running an online survey in order to gather opinions from the community.

The details to join the public meeting are:

Please note – in keeping with the same principles as our Moderation and Comments Policy, we would ask that anyone intending to speak at the meeting please ensure they put their correct name on display, state it in the text chat if unable to do that, or make it clear verbally when speaking if joining by phone.

The survey can be accessed here: https://www.surveymonkey.co.uk/r/FN62VSB and submissions may be made at any time from now up until the survey closes at 6pm on Tuesday 1st June. This deadline has been chosen in order to allow us time to take account of any comments and draft possible amendments to be tabled in advance of the next public meeting of TCC, which is our AGM on June 9th. EDIT: This has now been extended – see new post here: http://tireecommunitycouncil.co.uk/consultation-period-on-our-planning-process-extended/

What is intended to happen after the consultation: The plan is for us to quickly consider feedback from the survey consultation, and consider any potentially helpful amendments to discuss to the draft policy. The current draft will be tabled for a decision at our AGM next month, and TCC members will vote on what to do with it then.

The first formal meeting of the newly convened planning sub-group of the Tiree Community Council met at 7pm on Tuesday 26th January 2021, via Zoom. The meeting was open to the public having been notified on our website in advance.

In attendance from the public: 1 member, by phone

It was noted that Louise had been unable to attend due to a meeting clash, and Iona had given apologies. Phyl also noted that while happy to chair to facilitate he was very busy at work lately and as a result very tired, and would be happy to take more of a backseat in the discussion! Phyl also suggested that it might be useful to consider seeking some volunteers from the community to join the sub-committee as non-councillor members/advisors – this would be selective/targeted rather than just by an open call. John agreed, suggesting a mix of relevant professional expertise and direct lived experience within key elements of the community (e.g. crofting) would be ideal. Further thought to be given to this and ideas for people to suggest brought back.

Stewart presented a paper he had prepared which summarised the planning process as it is relevant to us as a Community Council. Some clarifying points offered by John on one or two points.

Continuing with his paper Stewart outlined briefly how TCCs role functions as a “statutory consultee” within the planning process of Argyll and Bute Council (and beyond), with further comments added by John. Focus was directed on the importance of understanding how we determine what matters are “material” – meaning legally relevant to a response to an application, and therefore where we should focus our energies.

Further discussion of the document at this point focussed on the zoning that is in place in the Local Development Plan for Tiree and Coll, the key areas on the map that are helpful for this subject are the “Settlement” areas (presumption in favour of housing development), the “countryside” areas (presumption AGAINST housing development and the “Rural opportunity areas” (essentially where it’s a “maybe”). Suggestion that we’d expect not usually to need to get involved in applications for the first of these, always for the second (unless it’s specifically for a croft house, where there is specific provision for this), and usually for the third (except for croft houses).

We could of course be asked to or minded to oppose or to support applications depending on the potential impacts on the community. Also important to be aware of areas of archaeological significance, environmental protection, etc. Not likely to need or want to get involved in such things as domestic alterations (minor extensions, etc) but more likely to get involved with listed building applications, etc. There is guidance available which we should have reference to which helps identify what would be considered to “have an impact” and obviously we take account of the views of community on that as well.

Another key test on if we should get involved is if an application is a “departure from the Local Plan” – again this might then be something we could either be minded to oppose or, in fact, to support if there are good arguments for the community to allow the exception.

Discussion about how we take account of considerations of immediate short term impact/views and balance/reflect this with longer term impacts/precedent setting – (e.g. “OK this one might be OK, but what if 20 more applications like this come along in the next five years). For these issues, feeding into the setting of the Local Development Plan would be key.

General agreement that it would be helpful to develop something of a “checklist” or chart to follow to assess an application in a clear way to determine relevance – akin to a risk assessment. Agreed that the sub-committee should consider further how we assess “impact to the community” in relation to such a process.

ACTION – Stewart to add further details to the paper, Stewart and John to lead on developing further ideas around capturing a draft “process” for consideration at future meetings.

Phyl suggested it would be well worth trying to see if we can find existing material on this developed by other Community Councils. John agreed and stated that he would contact Cumbrae and Mull CCs to ask what they have. Phyl suggested also contacting the Scotland-wide Community Council support service (run by the Improvement Service).

ACTION: John to contact the above three places to see what he can find.

3. Establishing a response mandate from the community

Due to two members not being present who the others felt would have particular contributions to make to this point, it was agreed to postpone this area to the next meeting.

There shall be a meeting of the Tiree  Community Council  Planning Policy Sub-committee on
Tuesday 26th Jan at 7.00pm via a Zoom online/phone meeting.
As a formal sub-committee of the council, members of the public are entitled to attend to observe the meeting.
Agenda:
1.0 Planning Process Outline
2.0 Statutory Consultee ( TCC)  Process
a) Determining if an application has an impact on the community
b) Assessment of Compliance or Departure from the Local Plan
c) Preparing an Objection or Support Response
3.0 Establishing a response mandate from the community
To join the meeting:
Join Zoom Meeting
https://us02web.zoom.us/j/85859965039?pwd=Y2JmdnJEcENzMUJUVlppdmNVb3lDUT09

Find your local number to dial in from outside of the UK: https://us02web.zoom.us/u/kBjTA7hFw

The First Minister announced a website set up by Scottish Government seeking input on a “framework for decision making” in response to COVID-19. Individual members of the public and community groups and organisations can submit ideas.

This includes proposed changes and options about:

The First Minister Nicola Sturgeon emphasised the need for transparency when she launched the framework and invited the people of Scotland to engage in this conversation to help us take the next steps to navigate to a new normal.

Our first public meeting of the Community Council since this situation began was held on May 6th, and the deadline is on May 11th so there is little time left for TCC to develop a full response to this on behalf of the community – but we are looking at doing what we can. However we’d encourage anyone with thoughts to submit these as an individual:

The site can be found here: https://www.ideas.gov.scot/covid-19-a-framework-for-decision-making

At our meeting last night there was discussion about the planning guidance available to local residents seeking to develop their homes or construct new buildings. The meeting agreed it would be helpful to draw to the community’s attention the existing guidance, to which planning decisions must have reference, which was published in 2007.

The document was held to be an excellent and most helpful piece of planning guidance that should be the envy of many other communities, but there was general agreement that there would be benefit in exploring the possibility of it being given an update (the previous consultation on it now being 12 years old) and that in particular it would be useful to develop more detail around the ways in which design of buildings could evolve in future.

Councillors and members of the public suggested that residents keen to explore use of new materials and construction methods might find it useful for the guidance to explore further how a balance could be struck between innovation and having regard for the distinctive look and feel of Tiree.

The TCC agreed to reach out to the Council Planning department to see what options might be available to explore this. The existing guidance can be found on the Argyll and Bute Council website here:

Members of the community may be interested to attend this meeting, discussing a subject very relevant to the future community-led development of Tiree. The event is free to attend and open to any member of the public:

Come along and find out how your community can benefit from:

This is a free event, open to all. Tea & coffee will be provided.

For more information please contact us on: info@landcommission.gov.scot or 01463 423 300

The link offers all the relevant documents .

This MPA proposal has been in gestation for 4-6 yrs

One of the proposed areas  is  the Seas of the Hebrides. This includes Tiree.

It is on the Agenda for discussion  at TCC’s 19 th June Meeting. 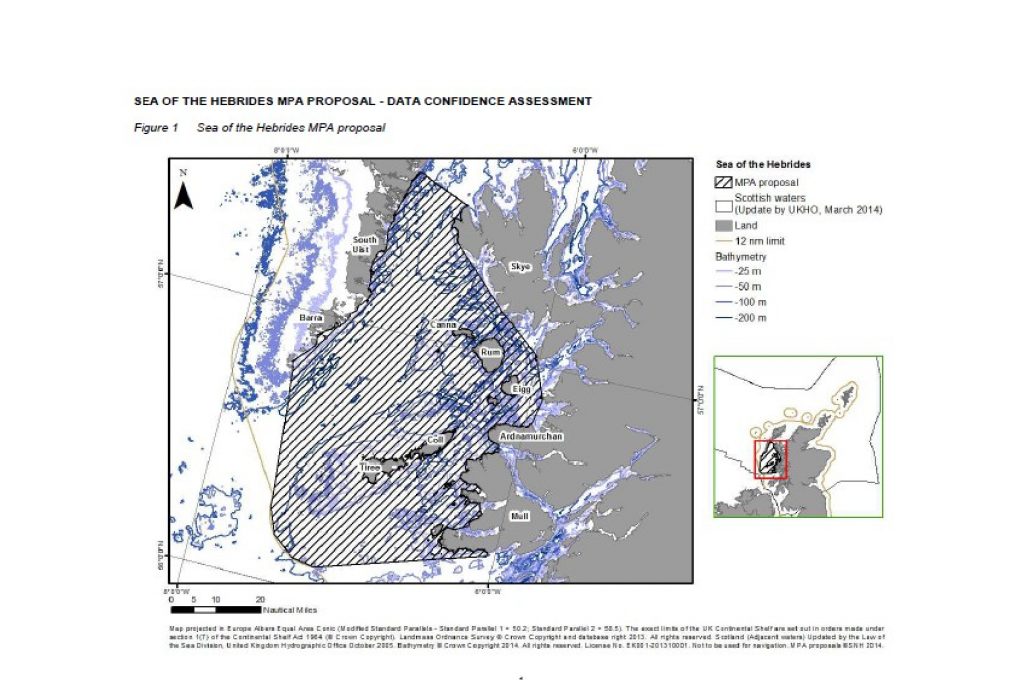