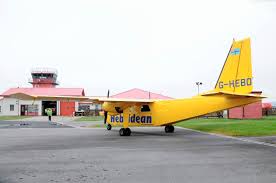 Tiree may lose it .

Cast your memory back to the summer, and the August Consultation regarding Argyll Air Services from Oban to Coll, Tiree ,and Colonsay which are subsidised by Argyll and Bute Council (A&BC)

Argyll Air Services were put out to tender in Sept 2018. When the tender closed two months later (Nov), only one submission was received. It was rejected, being deemed non-compliant. This sole bid was from the current service provider, HebAIR. TCC /TTF has not been informed as to the reason(s) HebAIR bid was rejected ,but can only assume the reduced subsidy was a significant factor.

In the interim period A&BC has considered options to move forward. After intense lobbying, jointly from Coll,Colonsay and Tiree Community Councils, the Policy and Resources Committee(PAR), at its most recent meeting decided to re-tender the tender, but under EU tender rules, any resulting positive tender award can only re-commence services from 28 June 2019.

It is unclear, at this stage, what the re-tender will specify , but Tiree has to anticipate that air services to Oban may cease as of 15 May 2019.

TCC/TTF has submitted the letter below to all parties ,incl Mike Russell MSP ,and hopes for a positive outcome from this re-tender to ensure a prompt re-commencement of Oban air services.

We were obviously relieved to hear last week that the Policy and Resources Committee (PAR)decided to re-tender for the Argyll Air Service.

We do appreciate the considerable sums that Argyll and Bute Council have spent over the last decade, both on the PSO itself and the running of three airports.

We on Tiree place an extremely high value on this service for the reasons set out in our joint letter to the PAR Committee. Clearly, it would be a major step backwards if an island group such as the Inner Hebrides did not have an air service connecting it to its regional hub. We are committed to restoring the service as soon as possible after it lapses on 15 May 2019.

Our concern now, however, is that simply sending out exactly the same tender documents to the same airlines will result in the same answer: no compliant submissions to the tender.

Our feeling now is that Argyll and Bute Council should introduce additional flexibility into the second tender document to allow any potential operator to make a value for money bid, based upon their own operating and cost centre criteria. This would maximise the chances of retaining a renewed Argyll Air Service within the financial constraints agreed by the Council for the next three years.

As part of this flexibility, one proposal that you might want to consider is switching the Oban-Tiree service to a commercial basis route. On this basis, Oban-Tiree would come out of the PSO and operate in much the same way that Hebridean Air Services currently operates the Oban-Islay route. Our understanding is that passenger figures and profiles are broadly similar on the Tiree and Islay routes.

We have to say that we have been disappointed over the last two weeks by the lack of information and consultation that our community’s representatives have received from elected Council members and officials. We do understand the principles of commercial confidentiality, but we do not think we should be receiving almost all of our news from the media. We would certainly be interested to see a copy of the new tender document.

Please come back to us if you would like to discuss this further. Thank you for your work on this project,