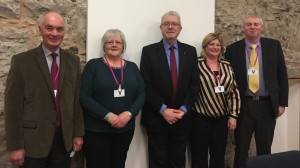 The Minister opened the meeting by confirming that he will take up the Community Council’s offer to visit Tiree in early summer.

The Community Council firstly took the opportunity to acknowledge the positive improvements to sea and air transport links they have seen with Transport Scotland. The Minister was able to announce that there will be increased capacity of eight flights to be added to the Glasgow to Tiree route, spread between the Twin Otter aircraft and larger 34-seat Saab 340 aircraft. Three more flights normally scheduled for the Twin Otter will be flown by the larger Saab 340s to provide extra seats around the time of the Tiree 10K in April, the Tiree Music Festival in July and the ultra-marathon in September.

Following negotiations with BT the Minister advised that a further green cabinet is to be fitted in Tiree. The go ahead has also been given by planning for the erection of a 4G mast. Housing issues were also raised and Michael Russell MSP confirmed he will write to Argyll & Bute Council about planning permissions for new entrant croft housing.

“This was an extremely useful and constructive meeting for the Tiree Community.

“We were extremely pleased to be given the chance to cover so many issues that are important to Tiree.”

“This meeting was very successful and gave the opportunity for the Minister to hear from the Tiree Community.

“I look forward to the Ministers visit to the Tiree and hope to join him to follow up the important points raised today.”